The Book of Joan – Lidia Yuknavitch

Posted on November 4, 2017 by sarahsouthwest 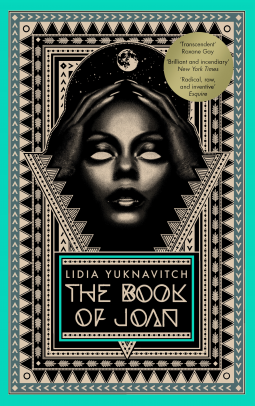 This took me back to my student days in the 80s, buying second hand Viragos and Women’s Press books at the bookstalls on the South Bank. It feels very much in that tradition of feminist sci-fi, and I haven’t read anything like it for a long time.

The main characters are Christine Pizan and Joan of Dirt, and the action divides between Earth and CIEL, so you can see we are in symbolic territory here. These are figures who trail the  herstory movement, and feminist iconography in their wake.  It’s almost a religious parable, if your religion encompasses a direct connection with the planet as a living thing, pan-sexuality, and the use of the body as a form of artistic self-expression, and it’s all set in the aftermath of the war that literally ends all wars – and just about everything else.

Big themes. The battle between a dehumanising retreat into technology and the great, visceral natural world, between female strength and de-sexed decadence.

Great images. The descriptions of the new bodies the inhabitants of CIEL have developed – more like living i-phones than real people – and the high-tech prison they have made for themselves, are particularly fascinating.

So there’s all this, and a good story, too. In fact, you could probably just read it as a good story, if you weren’t the kind of person who hung around second-hand bookstalls snapping up second-hand feminist literature in your student days.

I'm now in my early 50s. I started writing again as a way of exploring the world, and feel that over the last 2 years I have really grown as a writer. By day I work with children and young people with mental health difficulties. I juggle my own two children, my work, my writing practice, generally managing to keep all the balls up in the air.
View all posts by sarahsouthwest →
This entry was posted in books and tagged book review, feminist, Lidia Yucknavitch, sci-fi, The Book of Joan. Bookmark the permalink.